PHS String Quartet to perform on stage with touring show 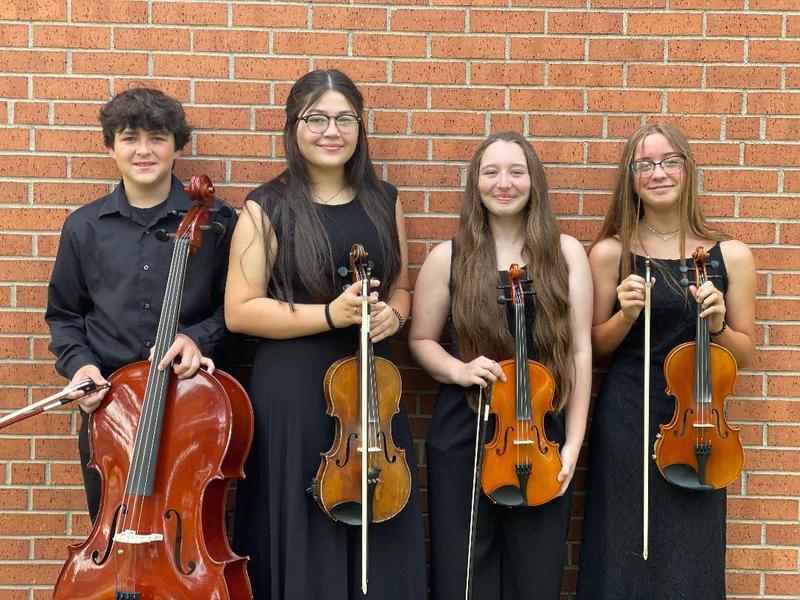 PARSONS, KS (08/10/2021) When the touring show Beatles vs. Stones – A Musical Showdown returns to the Parsons Municipal Auditorium on September 9, the Parsons High School String Quartet will join the professional musicians on stage to lend some local talent to this homage to the British Invasion.

The show: The two greatest rock 'n' roll bands of all time face off in Beatles vs. Stones - A Musical Showdown. Taking the side of the Fab Four is Abbey Road, one of the nation's top Beatles tribute bands. With brilliant musicianship and authentic costumes and gear, Abbey Road plays beloved songs spanning the Beatles' career. They engage in a "showdown" of the hits with Stones tribute band Satisfaction - The International Rolling Stones Show, who offer a faithful rendition of the music and style of Mick Jagger, Keith Richards and the bad boys of the British Invasion. The production includes multimedia, period costumes and vintage instruments. It has toured for years, with a critic for the Los Angeles Times at one point declaring: "this is the most unique tribute show in decades." The Parsons show is part of a 125-city tour of the U.S., Canada and Australia.

How the "Beatles" and "Stones" connection was started: The producers of Beatles vs. Stones approached Parsons USD Orchestra Director Lauren Burke looking for a quartet who could hold its own with a rock band in front of an audience. The show commonly hires a local quartet to augment the production while on tour.

The details: The two greatest rock 'n' roll bands of all time face off as the Plymouth Playhouse hosts tributes to the Beatles and the Rolling Stones. Renowned tribute bands Abbey Road and Satisfaction - The International Rolling Stones Show engage in a musical showdown of the hits. Beatles vs. Stones – A Musical Showdown returns to the Parsons Municipal Auditorium on Thursday, September 9 at 7:30 pm. Tickets are $25 - $45, plus ticket fees, and may be purchased by phone at (620) 421-7032 at the Auditorium Box Office or online at www.parsonsauditorium.com. Box Office hours are Monday – Friday, 9 am – 5 pm. There are senior, student, group and military discounts available. The show is appropriate for all ages. PMA is located at 112 S 17th St, Parsons, KS 67357.

And here is some additional information about the string quartet:

Katelyn Valdez, 17, has been playing violin for twelve years. She has competed at local solo and ensemble festivals with a group and as a solo, receiving one ratings in both performances.

“I think the reason I like playing violin so much is because it helps give me an outlet to express how I am feeling.”

Katelyn participates in musical theater, swimming and choir. She is also an active member of the National Honor Society.

The senior hopes to attend college to study Music Education.

Brianna Boucher, 15, has been playing violin for seven years. She has competed in the local solo and ensemble festivals and received high ratings.

“Back in elementary school I had a friend who played violin and I joined orchestra to play with her. I genuinely liked playing so here I am today.”

Brianna enjoys playing other instruments including piano and guitar. She also is a member of the basketball team and has enjoys going to a summer tennis camp. Brianna is an Honor Roll student.

The sophomore hopes to attend college to study Music upon high school graduation.

Leticia Mota, 17, has been playing viola for nine years. She has competed in the District and State level solo and ensemble competitions, receiving one ratings.

“When I play viola, it gives me a feeling that I don’t get from anything else. I love the sound of it.”

Leticia enjoys dancing, swimming and singing and is a member of the school’s cheer team.

The senior plans to attend college upon high school graduation.

Conner Barcus, 14, has been playing cello for two years.

“My friends were in orchestra so I decided to see if I liked it and now I’m still doing it.”

Conner enjoys playing football, basketball and tennis for the school. He has previously achieved being on the honor roll.

The freshman is excited to see where his studies take him after high school graduation.

And here is some additional information about Parsons High Orchestra Director Lauren Burke:

And here is some additional information about the Parsons High Music Program:

Since Lauren began in 2014, the Parsons Orchestra program has quadrupled in size. In the years 2014-2018, the high school orchestra earned a superior rating at regional small group contest. They earned a superior rating at large group contest in 2019 and 2021. Burke’s primary goal is to ensure all students in Parsons District Schools have the opportunity to participate in string education and are able to grow a deep love of music.

And here is some additional information about "Beatles vs. Stones - A Musical Showdown":

Alternating mini power sets with the two bands coming together on stage for an amazing encore makes this show a once-in-a-lifetime event.